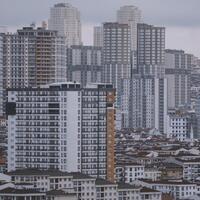 House prices in the spotlight

President Recep Tayyip Erdoğan has called for house prices to be closely monitored as the government unveiled a package of cheaper home loans.

There were media reports suggesting house prices rose after the announcement of the new financing plan. The issue was discussed at a meeting of provincial leaders of the ruling Justice and Development Party (AKP), chaired by Erdoğan earlier this week.

“Inspections will be strengthened,” Erdoğan told party officials, asking them to coordinate their efforts with relevant ministries and authorities.

The government on May 9 announced measures to provide cheaper home loans to combat soaring property prices.

According to the program, loans with a monthly rate of 0.99% and a term of 10 years will be granted to first-time buyers for houses worth up to 2 million Turkish liras (130,000 dollars).

Under a second scheme, called the “expanded finance package for housing”, loans with a monthly interest rate of 0.89% and a tenor of 10 years will be granted to those who convert their savings into foreign currencies. foreigners in Turkish lira or sell their gold to the Central Bank to buy houses worth up to 2 million lira.

In the meantime, a presidential decree, which modifies the program of citizenship by investment in real estate, has been published in the Official Gazette.

The new regulation increased the minimum amount required to be invested in properties by foreign nationals to obtain Turkish citizenship from the current $250,000 to $400,000.

The new regulations will come into force one month later.

The decree also states that foreign nationals who join the private pension system with at least $500,000 or the equivalent in foreign currency and remain in the system for three years will be eligible to obtain Turkish citizenship.

Life is too short to delay buying